Over the past several years, sex has become a much more public and open topic. However, if one digs through the trenches of vintage advertisement, it doesn’t take long to realize that humans have always been obsessed with sexual adventure and orgasms. It turns out that women have really always been shoving things up their hoohas and rubbing things against themselves just like they do today.

While many early sex products were forced to hide their true orgasmic benefits, clearly there has been a market for sex since the beginning of time. And when you think about it, that’s really not surprising at all. So please enjoy this delightfully stimulating collection of vintage sex-related products…

Vibrating chair — because vibration is life 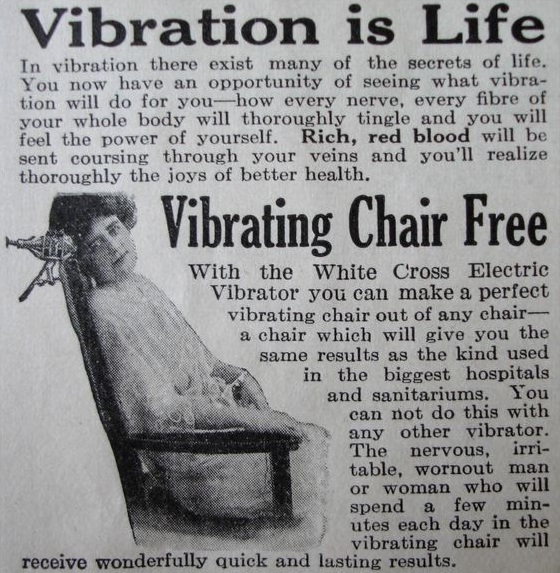 Back in the 1800s and early 1900s, many women were diagnosed of hysteria due to anything from having free thought to being sexually frustrated. When it came to the former you might get thrown into an asylum, but with the latter you could get some relief by going to your doctor.

And this doctor subsequently…well…gets you off. This used to be done by hand by a very eager doctor, but when word got around we can imagine the service quickly became tiring. So inventors came up with products that did the trick.

We don’t think that’s the exact backstory behind this vibrating chair device, which looks heavenly, but it’s helpful to know as we continue to explore strange orgasmic devices from the past. 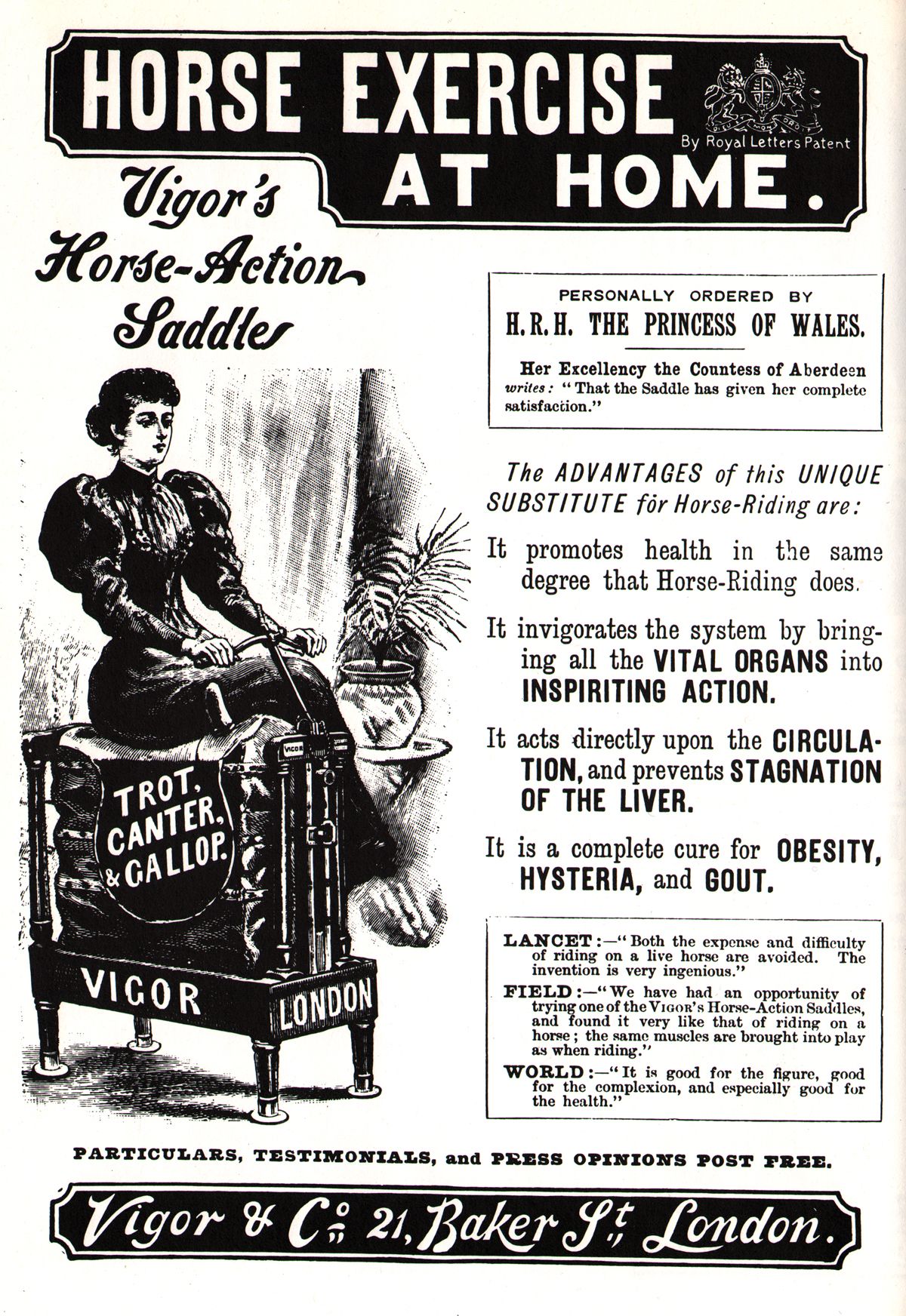 Notice it advertises itself as a cure for hysteria — AND gout! Well alright, I’ll take one. 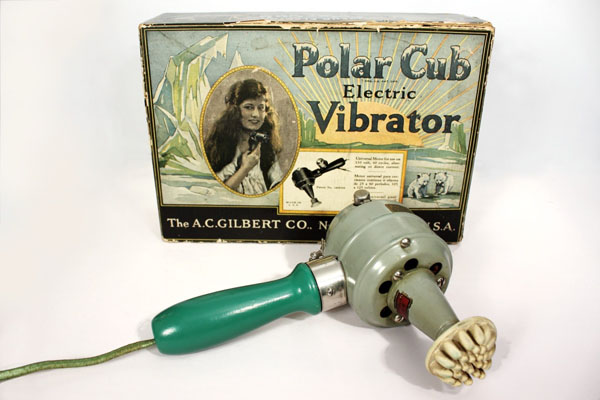 This contraption from the ’20s looks more like a death ray than something you should put near your vagina. Maybe vaginas were sturdier back then. Either way, terrifying!

Hmm…$8.95 for an inflatable love maid? Something tells me that the actual product looks nothing like the “love maid” portrayed in the advertisement. Despite my suspicions, the ad copy informs me that “Judy” is the “most amazing, realistic and lifelike companion that you’ll ever own.”

Also, her “strong, lasting vinyl” body is “almost too human” and “responds to your every touch.” Still, I’m skeptical – but wait! There’s a 10-day home trial! Well then, the makers of Judy must really believe in their product with that sort of money-back guarantee. 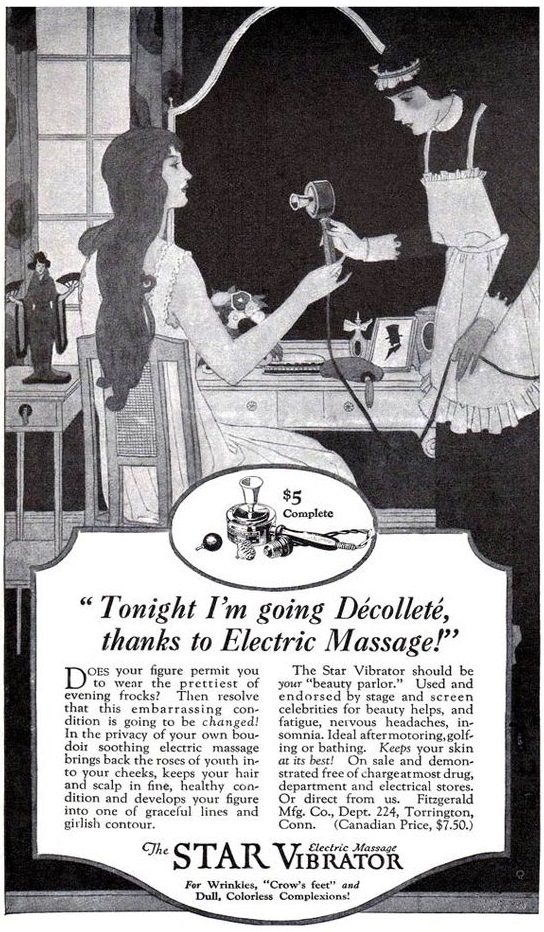 There are a ton of old quack weight loss products that include vibrating belts, but some ads were a little more suggestive than others. And I mean, if you’re going to sell something, might as well just slap all kinds of health claims on it. Reading this website once a day cures cancer. 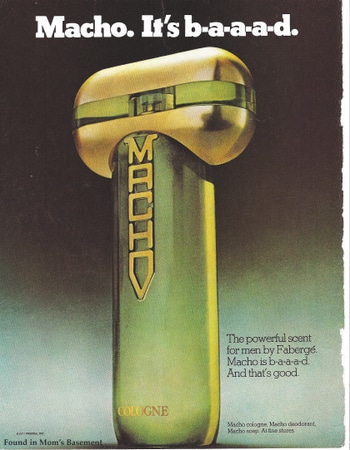 I don’t know about you, but I prefer that all my home products come in packaging shaped like a penis. This cleverly titled cologne is clearly making a thinly veiled attempt to insinuate that users of Macho will exude enhanced virility and masculinity. I wonder if they suggest you “shake well before using”? Also, what do you want to bet the cologne smells like chlorine? I still WANT it, for a conversation piece if nothing else. 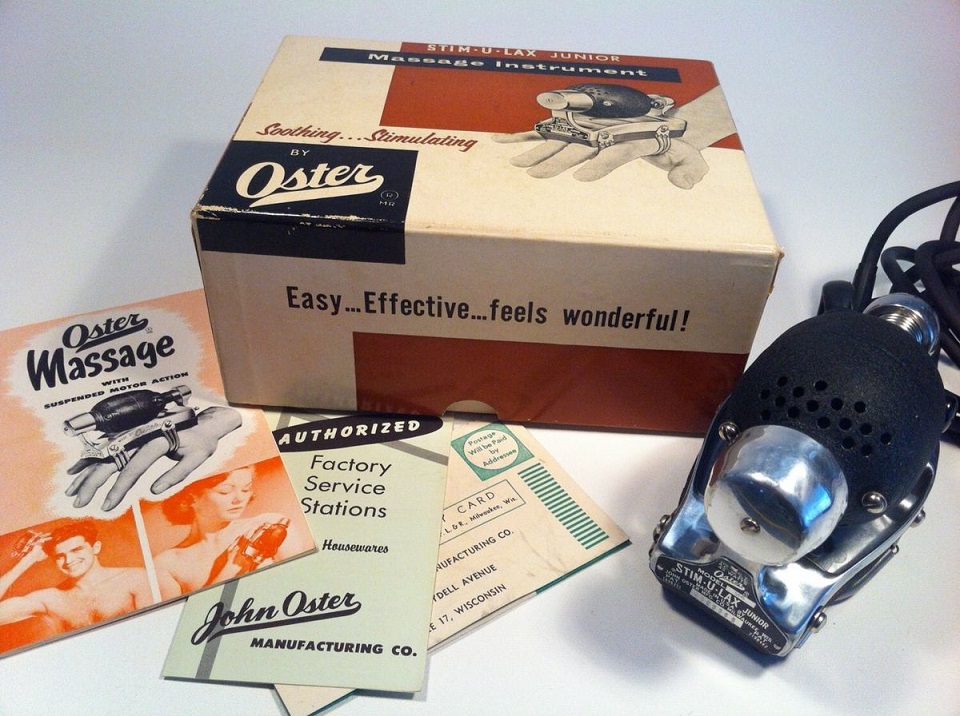 This little nugget looks like a Batman gadget more than something used for stimulation. Of course, this was advertised as ideal for massaging your neck and head and the rest of your body. But let’s be real: Why use it there when you can use it on your bits? 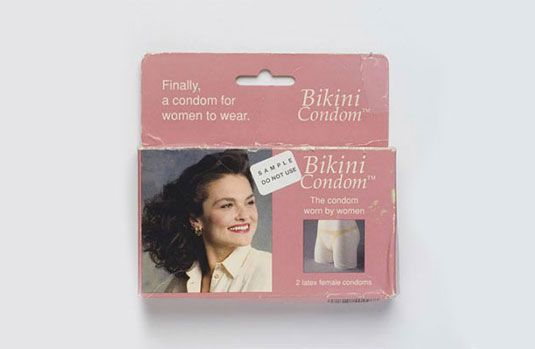 A female condom/underwear mash-up is one of those products everyone knew they would fail, and then they did, but it was very much a real thing. The FDA classified the product as “vaginal pouches” and you could reuse the condoms over and over again — which makes them even less sexy. The product was “designed to line the vagina during sexual intercourse” and was “manufactured all in one piece from thin, cream-coloured latex, the ‘Bikini Condom’ consists of a belt, which fits around the hips, attached to a pouch-like tube, which is inverted to fit inside the vagina,” according to the Museum of Applied Arts & Science. 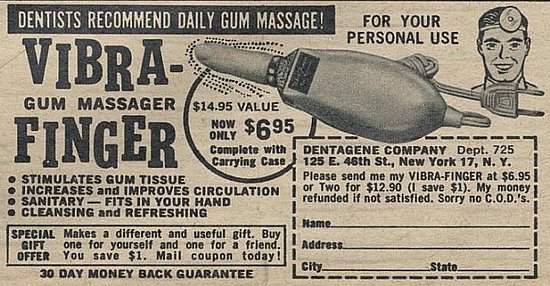 The Vibrafinger surely takes disguising sex toys as health products to a whole new level. Give your gums a lovely little massage. Or just, you know, use it in and on your hoo-haa.

Put Some Fun Between Your Legs t-shirt 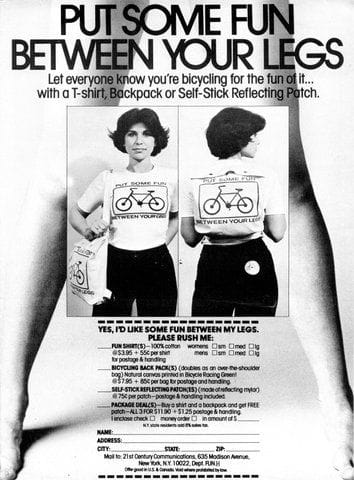 There have been plenty of sex-punned t-shirts printed over the decades. However, I find this one particularly hilarious. I think the vintage charm has a lot to do with it – the ad was clearly printed sometime around the 1970s.

Of course, the model’s proud posture and dome-y haircut doesn’t hurt either. A quick Google search suggests you can buy a modern “Put THE Fun Between Your Legs” t-shirt, but like most modern reproductions, it pales in comparison to the original. 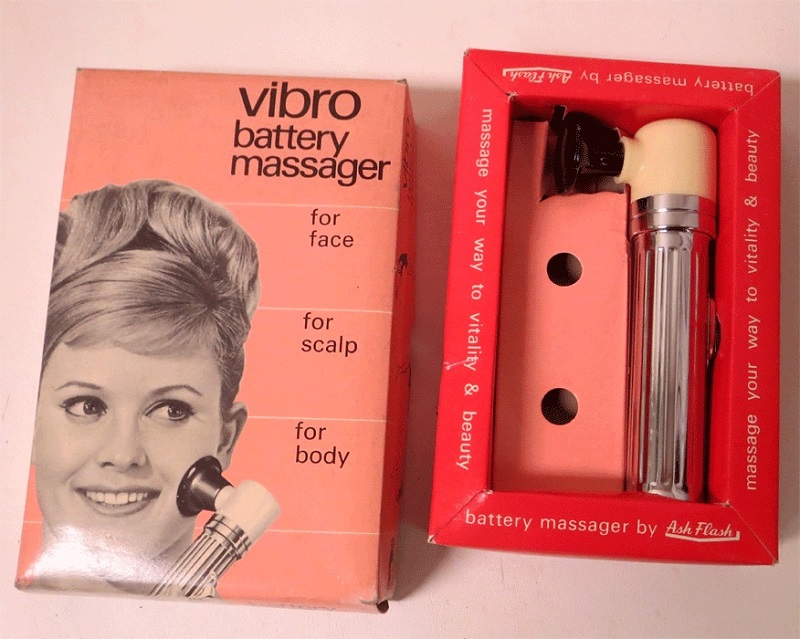 Suction cups were big for personal vibrators in the 40s, 50s and early ’60s. I have to wonder who really used this thing to massage their face, though. Finally, a stylish and convenient way to tell your special lady (or a complete stranger) that it is, in fact, time to f*ck. In case you can’t read the fine print, this marvelous little watch lets you know that it’s time to f*ck by flashing “Time to F*ck” every THIRTY SECONDS! If you’re keeping count, that’s 2,880 times a day. Now, the ad suggests that you should “not try to keep up with this watch,” but everyone knows that time is nothing to f*ck with – so obey the laws of time and physics and START F*CKING! 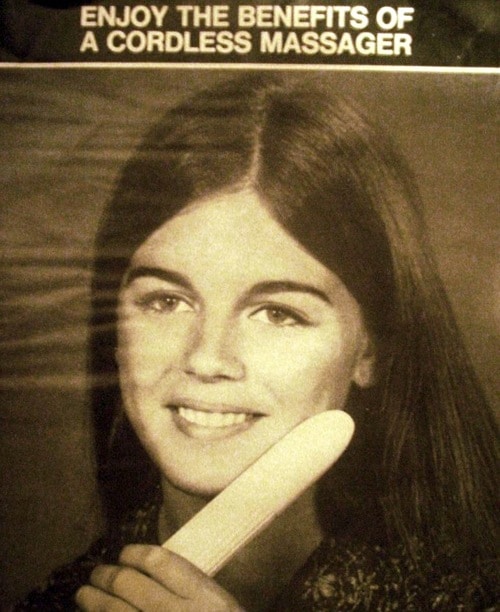 Here’s yet another product pretending to be something that it’s not. While that wholesome model may have tricked you into thinking that cordless massager is meant to be rubbed all over your face, the shape and design of the product itself tell you what the manufacturers really have in mind. Various massagers for both him and her There were also vibrators marketed as fun for both him and her. Not kinky at all. Would you believe the second, green one was made in 1933? Looks a little sleek for something so old.

It was first introduced in the ’60s and grew in popularity by the ’70s. Its longevity compared to all of these other silly products says a lot.

3 thoughts on “<span class="entry-title-primary">15 terrifying vintage sex products that we kind of want</span> <span class="entry-subtitle">Want to enjoy the salubrious benefits of horse exercise massage? Come on in and let's cure your female hysteria.</span>”