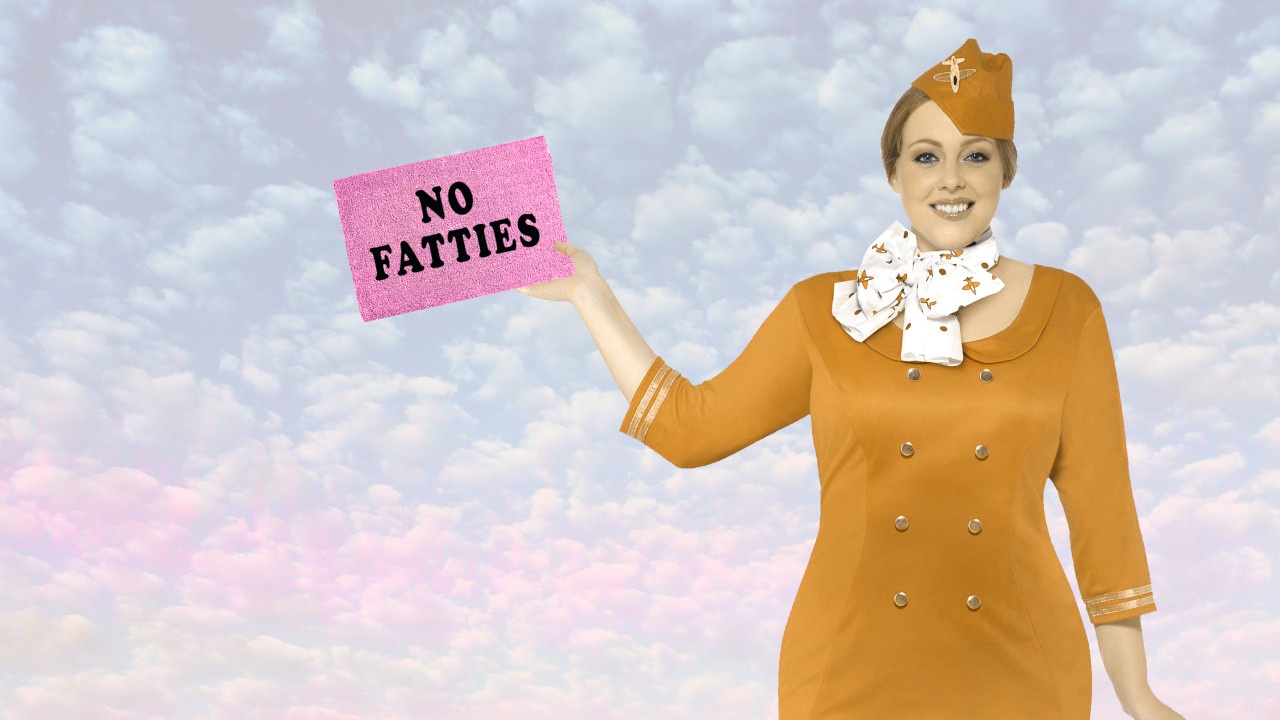 I’ll confess I’m not the most relaxed flyer. For one, I’m quite fat. For another, among the many and varied flavors of anxiety I deal with, the type specific to travel occupies a pretty plum spot.

Part of my travel anxiety is connected to my propensity for spectacular and traumatic motion sickness, for which I am notorious. Part of it is purely irrational what-if-the-plane-crashes fear. And part of it is related to that whole being fat thing again, because fat people of a certain size learn to be wary of air travel as we can never be sure when our fattery is going to be challenged by an airline employee who gets to decide whether we’re allowed to fly on that particular flight or not.

So yeah: Me and flying are not a happy pair, although we are a pair that must spend time together fairly often, considering how frequently I travel.

Thus I was not in my most cheerfullest mindset on a six and a half hour flight from Boston to San Francisco yesterday. About four hours in, I was feeling very much in need of a second cup of tea.

Did I mention this was a morning flight, and morning flights are a thing I basically NEVER TAKE because the aforementioned anxiety is like ten thousand times worse if I’m having to wake up early to get to the airport, because I stress that my alarm won’t go off so I wind up barely sleeping which ironically makes it HARDER to wake up on time and get to the airport on time and without forgetting anything?

Also can you tell I’m writing this in the midst of said sleep deprivation/six and a half hour flight/travel anxiety ridiculousness cocktail of mental… mentalness?

Where was I? I wanted a second cup of tea. The tea-making apparatus was in the back of the plane and I was in the front, so first I had to waddle my ass down the aisle trying not to bump anybody’s shoulders with my hips, like a really large and anticlimactic game of Operation.

Upon arrival, I asked for a cup of tea. And tea, it was made.

There were three flight attendants chilling out back there, and when I asked for milk and two sugars, one of them took the opportunity to say, in a comically cheery voice, “Two sugars! You only need one! One tastes the same as two!”

I kinda blinked a few times. I mean a) I’m pretty sure sugar’s sweetening effect is in fact cumulative according to the volume of sugar applied and b) Did I just get SUGAR-POLICED for real?

I am one of those people who has been so indoctrinated with a terror of back-talking anyone involved in air travel that I would probably accept almost any indignity with a placid smile, for fear of otherwise next waking up in a cell in Guantanamo. Which is odd, because in most other areas of life I am way on board with challenging authority. I guess my ability to fly is more important to me than standing up for myself in this one situation.

That is a bummer. Because what I would have LIKED to have said — also cheerfully! — is that the number of sugars I put in my tea is none of her fucking business and I’d suggest in future she keep her commentary on the beverage choices of complete strangers to herself. AND one sugar most assuredly does not taste the same as two. PLUS if the tea on this plane didn’t suck so badly it wouldn’t NEED any sugar at all. And ALSO fuck you, lady. While I’m at it. Because I was feeling defensive the second I got on board in the first place.

Her apparent friendliness didn’t make me feel any better about what she said either — critical comments from strangers about your eating/drinking choices are weird and unwelcome and unnecessary no matter the context or the tone of voice they’re delivered in.

I was also thinking WHYYYY DOES THIS ALWAYS HAPPEN TO ME? Do I look like someone who is receptive to stranger advice?

But instead I hemmed and hawed until her colleague handed me my damn tea and then I waddled back to my seat juggling my searing cup of tea and my hips and thought about how dumb it is that people can make tiny little good-natured comments like that and still be so annoying, if not upsetting — depending on their target.

Sure, this is an incredibly minor event, but minor events add up, and help to support a culture in which this sort of thing is considered OK. I still don’t understand why we think it’s ever any of our business to comment out loud on what someone else eats or drinks. This is why so many women feel so much shame every time they put a morsel of food in their mouths.

Can we stop it?

Can we at least work on it?