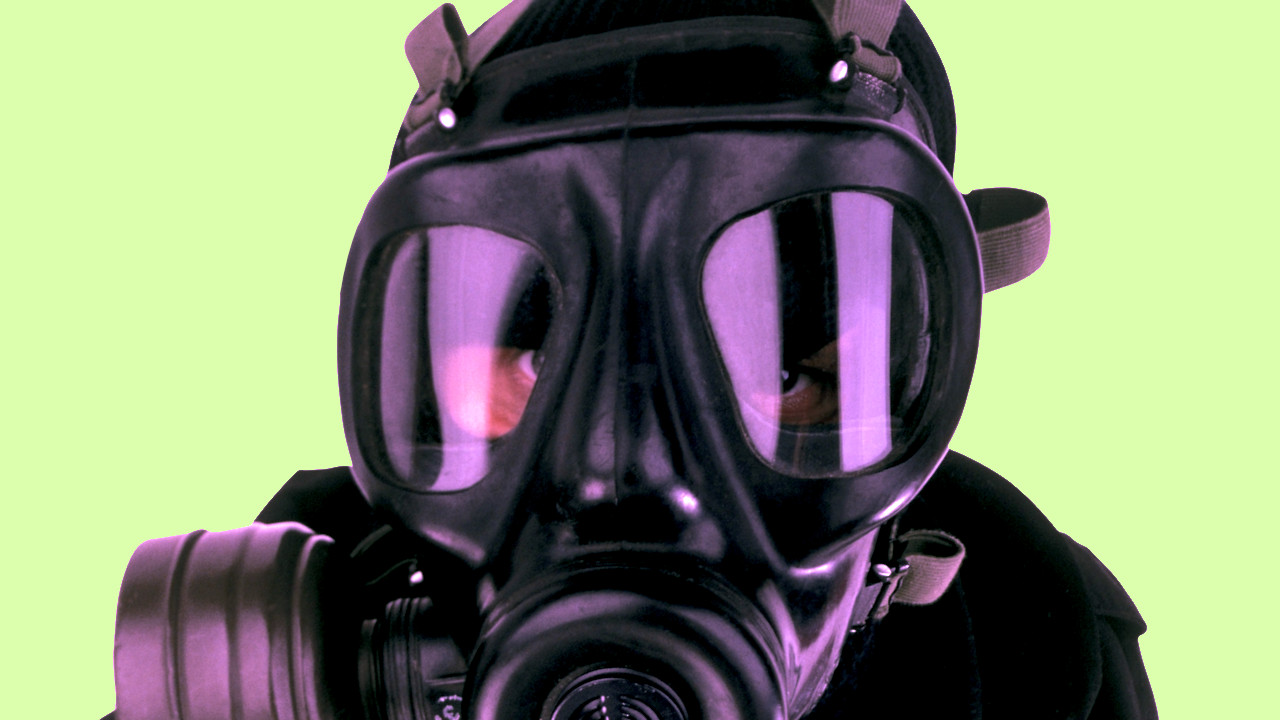 My husband was always a little strange — but that’s par for the course in a marriage sometimes.

Sure, he covered his face whenever he encountered the smell of bleach, and he took to maniacal cleaning rather than use poisons to eradicate a cockroach problem. He demanded we turned off the heat at night to protect his lungs.

I thought all of it was cute. It took me a while to realize that his unusual quirks were actually symptoms of a terrible disorder.

I met John* online. We were looking for a third roommate and he was one of the many people we interviewed that hot August day. He had a dark, curly mop of hair and a full face with dimples, and he seemed nice. He was from South America, and had traveled all around the world; I found him extremely compelling.

We interviewed a few other people that day but felt that we connected the most strongly with John, so we asked him to be part of our household.

When he later moved out, we stayed in touch intermittently. It was April, the year after he moved out, when he contacted me again. We began spending lots of time together after that. We went out together. He took me shopping and helped me nail a work presentation. I was surprised to feel how I was falling for him, considering I didn’t necessarily feel attracted to him while we were living together.

We finally made it official on a drizzly spring night. I was in love. We spoke about all of our previous issues as roommates and they all seemed to dissolve away. Soon after, I found out I was pregnant. Because we were in love, we decided that we wanted to marry right away. Things couldn’t have been better between us.

It took me a while to see the Obsessive Compulsive Disorder (OCD).

OCD, as defined by the International Obsessive Compulsive Foundation, is a disorder of the brain and behavior which causes severe anxiety in those affected. It’s estimated that one in 100 people have the disorder, which means that somewhere between two and three million people are currently living with OCD.

John’s symptoms began to emerge when we ordered a simple household test to be done. Because I was pregnant and we were living in an older building, we were concerned when we spotted some chipping paint. We wanted to get the apartment tested for lead, and after some wrangling with the landlord, she agreed to send a professional to have it tested. We were both dismayed when some rooms tested positive — and that’s when things began to unravel.

John’s disorder first emerged as a series of concessions he asked me to make for him. The first concession seemed perfectly reasonable. Otherwise, why would I have agreed to it? He asked me not to put magazines on the floor of the bathroom. See? No biggie. I agreed.

Soon, though, one concession tumbled on top of the other, and I found myself buried in unreasonable requests.

It seemed that instead of being a normal couple planning for the rest of my pregnancy, our lives had now become committed to the prevention of accidental ingestion of lead. At this point, John was spending hours poring over the Internet, reading the most current research on this terrible toxin.

According to his findings, it only took a piece of lead as big as a grain of salt to poison a child. Scary, I know. But with something that small, and invisible, how do you even begin to protect yourself from it?

According to John, nothing short of extreme vigilance would do. He wanted to be sure we weren’t exposed to one errant piece of dust, and began to monitor my behavior everywhere in the apartment. My actions were being strictly controlled. Things started to get tense between us.

Soon, we ate, spoke and breathed lead. Okay, not literally, thank God, but something close to that. Since the bathroom had the highest levels of lead, anything brought in there needed to be wiped down after use. Any clothing that dropped on the floor anywhere in the apartment needed to be laundered immediately. It didn’t matter if it was only on the floor for a second, or my only clean outfit — it went straight into the laundry.

I could have brought in dust from the bathroom which deposited itself on the floor in another room, he insisted. I’d have to wait in my pajamas until he could wash it. Only he could go to the laundromat since only he could follow proper procedure to get our clothes correctly cleaned.

After months of tension about all these things, and more, we decided the only solution was to move out. Our landlord offered to remediate our apartment, but he decided that whatever she wanted to do was going to put us in more danger and he refused. Money was tight, but he assured me he’d figure it out.

The move, of course, necessitated that he did all the packing, which was the second major concession I made. According to his findings, the only way we wouldn’t bring lead dust to the new apartment is if everything was dusted meticulously before we left. Since I had never done anything meticulously in my life, I agreed to let John handle it. It didn’t take me long to realize I had made a grave mistake.

It took John hours to pack each box. Although our bank account was cleaned out to make a security deposit, and I wasn’t working, he kept missing work anyway to keep packing. Our baby had now arrived and I was feeling especially protective, and became more and more alarmed.

Since we didn’t have cash, moving expenses were covered with my credit card. A very pricey HEPA vacuum cleaner, a special filter for that, masks, special wipes, you name it, went on my credit card with neither of us having any idea when we were going to be able to pay it off.

Desperate to be moved out by the date we agreed upon with the landlord, I purchased for him anything he said he needed. We had signed a special contract with her and wasn’t sure of the consequences if we broke it. I begged him to let me help and he wouldn’t budge. Something wasn’t right with this.

Out of frustration, I asked him to just throw whatever wasn’t packed out.

“But, even if I’m throwing it out, I have to clean that too,” he said. “It’s not safe for me to handle otherwise.” I just yelled at him to do it. I never wanted to be in that apartment ever again.

Here’s the thing: John is an intelligent man. He must have a plan, I thought. I told myself we’d figure something out. Thankfully, the new apartment we’d selected was in perfect condition. We had made it. I was happy. We stared out the window at our new view and kissed passionately.

But it didn’t take long for my husband to find hazards in the new apartment. Soon, I wasn’t allowed to walk by the windows of the apartment. I also was banned from the laundry room — all laundry had to be done by him. Months went by like this. He refused to unpack the few boxes we brought with us.

Although still financially vulnerable due to all the work he missed, I found myself replacing the things in the boxes with our limited funds. Most of our things had been thrown out, and the promised money from the job he got wasn’t materializing.

I realized this wasn’t a quirk, or something funny or interesting about his personality at all. It was a full blown disorder. And although he clearly had Obsessive Compulsive Disorder, he refused to get diagnosed, let alone treated. I was besides myself in frustration.

After months of feeling controlled and isolated from my friends, my tolerance level was low. It took one phone conversation to send me over the edge. That day, I had looked in the mirror that day to see how a new shirt I bought looked on me. He called, and when I told him what I was doing over the phone he started to scream.

Why was I in the bathroom, what was I doing in there, he screamed. I had no clue I wasn’t allowed in my own bathroom. This was after a week of brutal fighting, and it seemed he had no limits as far as how he would treat me? I was concerned about how my son would be affected if he continued to see Daddy screaming at Mommy like that. I had made enough concessions for him, and this was one I could not make.

So, on a sunny fall day I did the most difficult thing I had ever done in my life. I packed my bags and walked out on someone I loved.

It was later that day when he realized I had left. Drama ensued, of course, and we spent many hours speaking about my feelings over the phone. We talked about his disorder, and how I wanted him to get treatment for it. He refused. Naturally, he was extremely upset, but I refused to budge. I lived with my parents for several months, but eventually living in a small, rural town away from my friends and the city I’d known, began to wear on me.

And there was a bigger issue. Despite our problems, I still loved John. He cared about our baby more than anything, and wanted our son to be close to him. Things stabilized for us financially. Despite continued misgivings about how he treated me, I decided to move back in.

Things still aren’t perfect, but we’re both trying. I have a dream, though, that despite all this, there will be a time when we can walk through our beautiful city unencumbered by our fears, without worrying about lead. Until that day happens, we are going to therapy, and I will continue to work on my patience. As a friend so wisely said, “With love there is hope.” So I’m continuing to hold onto that hope.