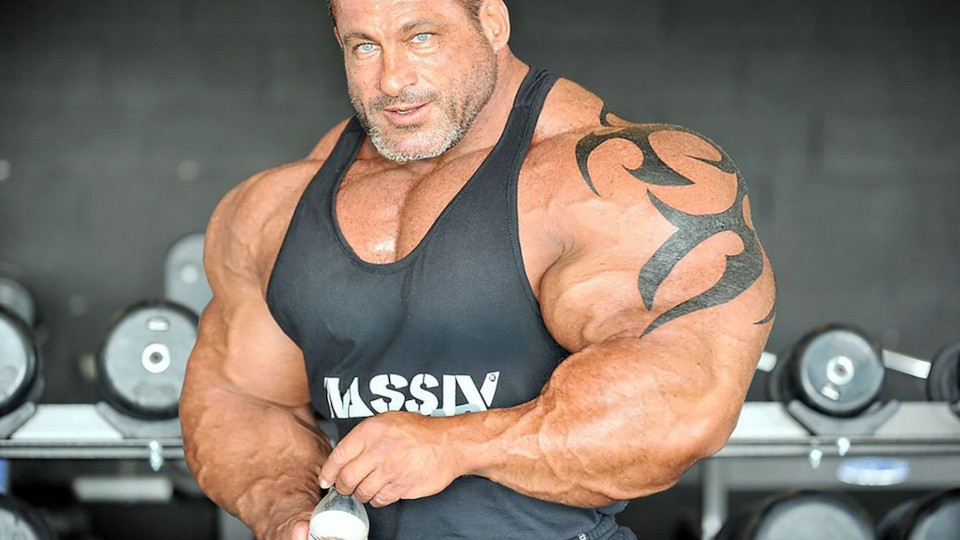 Let’s take a deep dive into the world of bodybuilding, which after considerable amounts of research we’ve discovered is a lot more disturbing than initial reports made it out to be. The drug-fueled scene is also whiter than Casper the Ghost!

We’ll start our list of disturbing bodybuilding facts off easy with the many weird skin problems endemic to bodybuilding communities, but trust us — it gets really dark. You’ll come away from this piece agreeing that it’s time for bodybuilding as it exists to be upended.

And before we begin, let’s be clear about one thing. Women prefer dextrous spidermen comfortable with dynamic gender roles — not the Hulk! If you feel the need to work on your exterior, consider than maybe it’s the interior you really want to change. 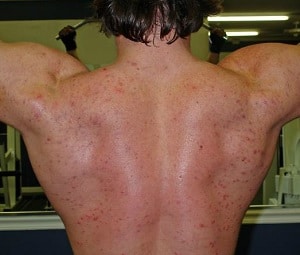 When you’re pumping your body with steroids (here’s a useful reference) to gain unnaturally large muscles, you’re also sacrificing your physiology to the whims of chemical reactions.

One common reaction resulting from the use of steroids is acne. Some bodybuilders even get cyst-like swellings on their feet and crotch from steroid use. Another common place for steroid induced acne is on your back, known as “bacne.”

Steroid acne has almost the same symptoms as typical acne. But with steroid acne, systemic steroid use is what makes the oil (sebaceous) glands susceptible to inflammation and infection. The steroids may be prescription medications, such as prednisone, or body-building formulations.

Another form of acne, known as malassezia folliculitis or fungal acne, is caused by a yeast infection of the hair follicles. Like acne vulgaris, it can occur naturally or as the result of oral or injected steroid use. 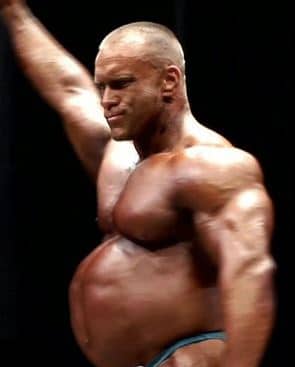 Another side effect is steroid gut, or HGH gut, which is a bloated and almost pregnant looking belly. This one is caused by bodybuilders combining synthetic human growth hormone (HGH) and insulin in a bid to cheat to pack on extra size, because white fragility doesn’t allow them to compete fairly.

This is why Arnold and other (particularly bodybuilders of color) legends from the past will remain the greatest bodybuilders of all time. Bigger isn’t always better…especially when it’s on your waistline!

(Note from “Juice Guru”: human growth hormone can be used without causing this gut, as some Men’s Physique guys use HGH and have tiny/vacuumed waists. Bodybuilders like Chul Soon are also thought to have taken HGH without developing such a gut. It’s when insulin gets involved, that’s when things start to look a bit pregnant.)

You get the most chest gains on Monday, for some reason (bodybuilders are superstitious)

It’s commonly believed among bodybuilders that the best results for chest gains happen if you train your chest on Monday. This widely-held belief is why you’ll often find guys lining up at the bench press station on — you guessed it — Monday.

Here’s the logic behind this idea. Bodybuilders have all weekend to rest up, which means their bodies will be more prepared to handle a grueling workout on Monday. Whether it’s true or not is sometimes a point of hot debate in the bodybuilding community, but bodybuilders certainly are prone to primitive superstitions. 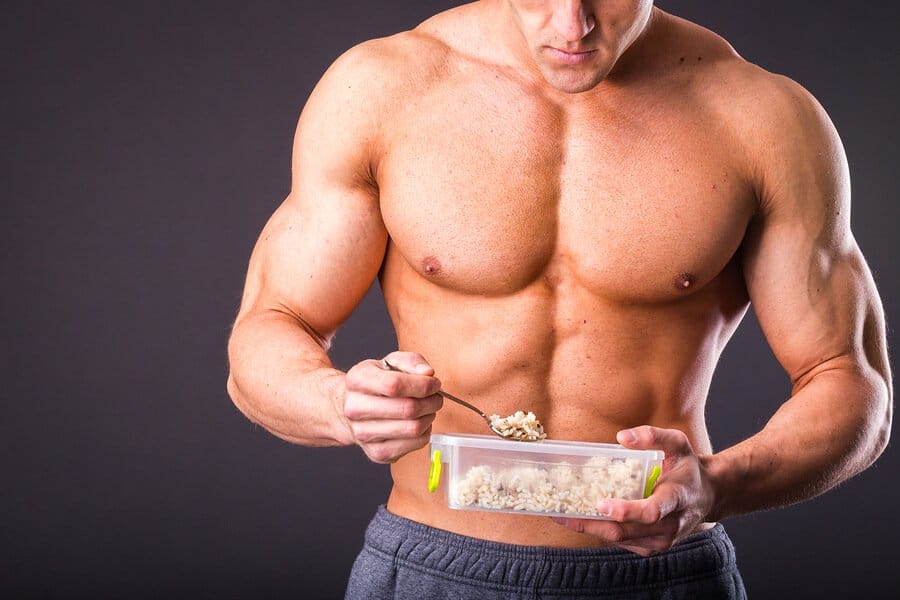 How far would you go to transform your body into a giant human machine? Bodybuilders go as far as eating monkey brains.

A 1984 article originally published in The New York Times mentioned that a “growth hormone was being extracted from cattle and monkeys” and used by bodybuilders. “Some of the material sold as growth hormone is nothing more than colored water, while some extracts have been made from monkey glands and cattle,” one doctor said at the time.

This fact alone makes bodybuilding 100 times more illicit and in urgent need of regulation. Well, that’s unless you’re from China, where slurping down mammal brains makes you smart and cures your cancer or something.

Bodybuilding is serious business, and dangerous business in the competitive bodybuilding scene. Bodybuilders are constantly exerting themselves to the extreme and sometimes they even risk their lives.

In 1999, a Testosterone Magazine received a lot of criticism for publishing a series titled The Dead Pool, which was a list of professional bodybuilders most likely to die in the coming year.

The Dead Pool series caught a lot of flack back in 1999, and it would likely catch even more criticism in today’s hypersensitive world. The premise was simple: have an insider with intimate knowledge of bodybuilding’s top pros comment on who’s taking what, and lay odds as to who will be the first to drop dead like a 300-pound hypertensive Jersey cow in Zubaz pants and matching do-rag.

To protect everyone’s interests, all the bodybuilders were given aliases, which some of Testosterone’s bodybuilding savants cracked in about 7 seconds.

Bodybuilders continue stacking even when pregnant 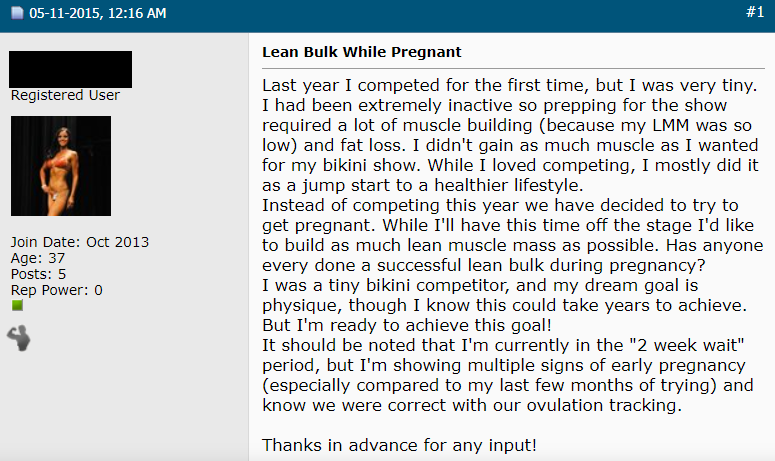 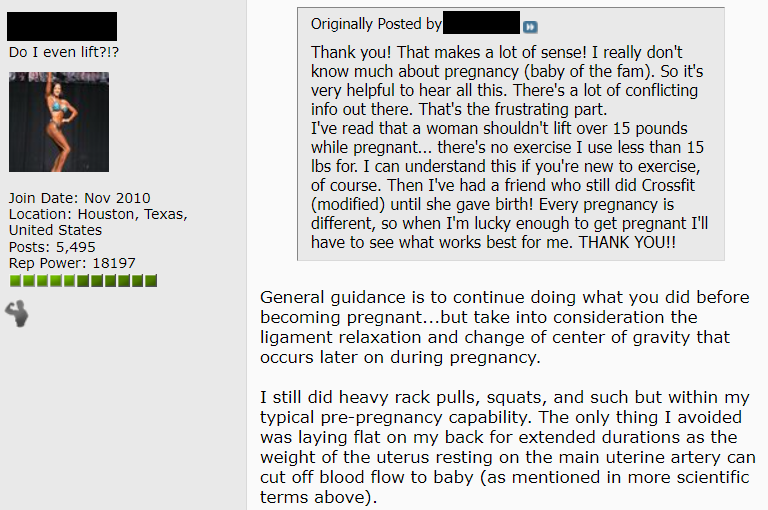 Would you smoke while pregnant? What about celebrating someone for doing it?

While technically a pregnant woman is a bodybuilder (harr harr), bodybuilding while pregnant often leads to miscarriage. And the bodybuilding community is all too often seen cheering on pregnant women engaging in this dangerous activity. Also note that it’s all white women doing this shit. Don’t lay any of this at our feet. 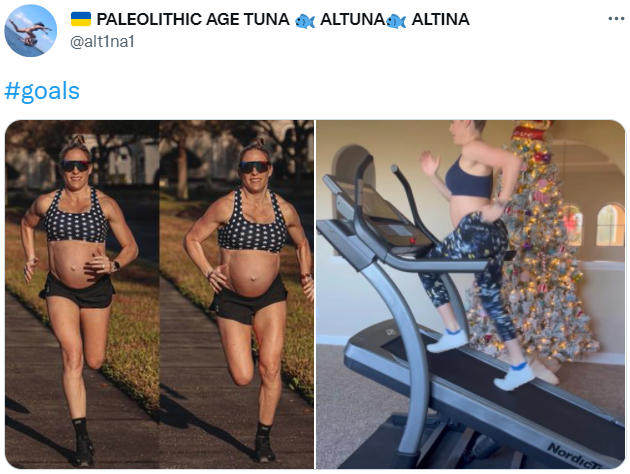 First we taught them to bathe. Looks like we’re going to have to teach them not to actively kill their own children next.

For some reason gay men love strong men with huge muscles. Now that I think about it, this fact should be common sense.

And in fact, already back in the 1960s, bodybuilding was seen as a sport for homosexuals. This made it more marginalized at the time, but the inherent tension between white hypermasculinity and white homophilic gaze in bodybuilding also made bodybuilders’ gender identity more ambiguous, especially in comparison with other strength sports where white masculine identities are much more traditional.

In 2015, Slate Magazine published an article with the title: “Has Gay Panic Ruined Bodybuilding?” In it, Slate writes about how bodybuilding was always “intertwined with gay culture, and early muscle men like [Steve] Reeves were gay icons.”

So there you have it. 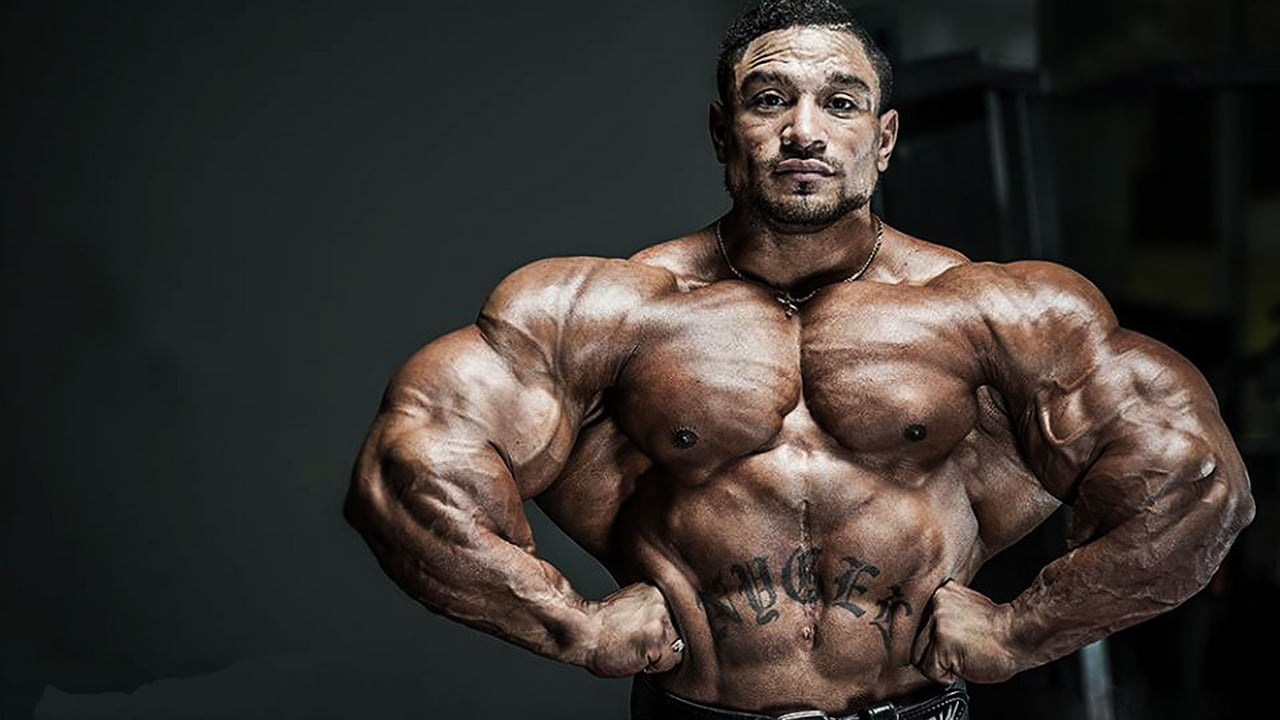 There are a zillion bodybuilding magazines and influencers that shill expensive machines and tout complex diets and $5k a month “juice cycles” to refine your bodybuilding routine. But the reality is that bodybuilding is incredibly simple. Just lift heavy stuff up and down repeatedly and your muscles grow.

Many bodybuilders are so obsessed with the aesthetics of their physique that they’ll resort to plastic surgery when legitimate (well, as legitimate as it can get) bodybuilding doesn’t work out.

Some bodybuilders and competitive athletes have even gotten plastic surgery to get fake abs, which obviously look disastrous when they begin to age (if not always).

Psychiatrists have an endless fascination with it

The obsession with bodybuilding has attracted equally obsessive psychiatrists, who have published mountains of academic research on the topic.

In fact, a search on Google for the terms “psychiatry + bodybuilding + filetype:PDF” will currently get you no less than 277,000 results.

This one was a no-brainer, considering the blinding whiteness of the scene. And normal people who come into contact with bodybuilders or their culture always come to the same conclusion and have that same old familiar take: “It has been my observation that pretty much all of them are either conservative or have very conservative opinions,” says one reddit thread discussing the phenomenon of bodybuilding being alt-right adjacent.

And science keeps backing this view up, coming to the same conclusion every time there’s a study. For example, research from Brunel University in London found that “physically stronger men tend to be more right wing and are less in favor of social and economic equality. The study found a significant correlation between those men who were heavier and stronger and the belief that some social groups should dominate others. These men were also less likely to support the redistribution of wealth, a typically left wing principle.”

Leg days are indeed skipped and the results speak for themselves 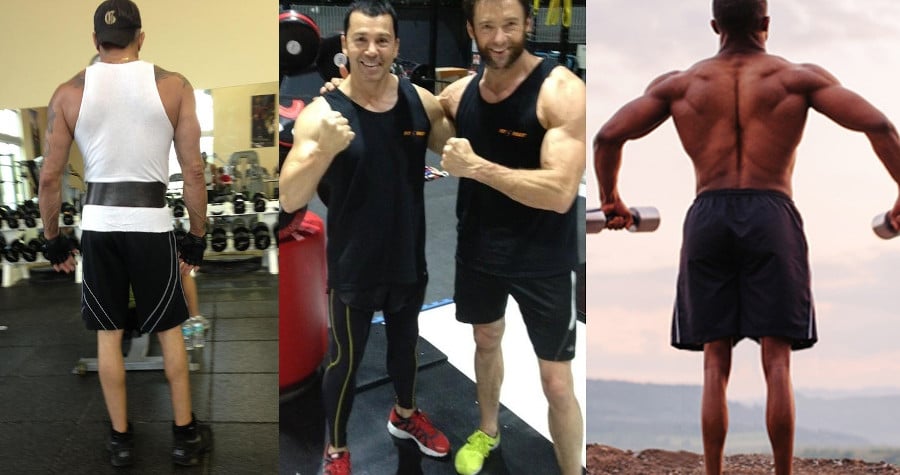 The joke about “skipping leg day” is not just a meme. To bodybuilders, leg gains don’t look as impressive as chest gains, and they feel they will never get as many compliments about how great their legs look as for any other part. And, let’s face it, bodybuilding is all about getting compliments from your fellow bodybuilders. Women aren’t into these freaks.

It’s commonly said that 37 percent of bodybuilders skip leg day altogether and end up looking like a cow resting on a pair of chicken legs. And while there’s probably no concrete evidence to support that fact, I’ve seen enough matchstick-legged bodybuilders to believe it.

Roid rage is real and can trigger mass murders

First understand that all bodybuilders use steroids. “A steroid ban could destroy bodybuilding as we know it.” is a direct quote from bodybuilding.com. And these steroids, when combined with white fragility, cause roid rage — extreme and uncontrollable aggression.

You’ve already seen the carnage bodybuilders leave behind as soon as there’s a traffic jam or some other irritating circumstance occurs. Normal people get on with their lives as best they can, but bodybuilders hop out of their car and start mauling random nearby people like enraged zoo gorillas. Or should I say pit bulls? Some people have started to take note of the unsettling similarity between bodybuilders and the breed responsible for almost all fatal dog attacks.

But roid rage doesn’t stop with beatings. It can often escalate into murder in what’s called the steroids-to-murder pipeline. When pro wrestler Chris Benoit, his wife, and his son were found dead in their home, police investigators found anabolic steroids nearby. Medical examiners who autopsied Benoit then found an elevated level of testosterone caused by a synthetic form of the hormone.

Benoit’s addiction to steroids had triggered roid rage and caused him to murder-suicide his whole family, and, sadly, they will not be bodybuilding’s last victims.