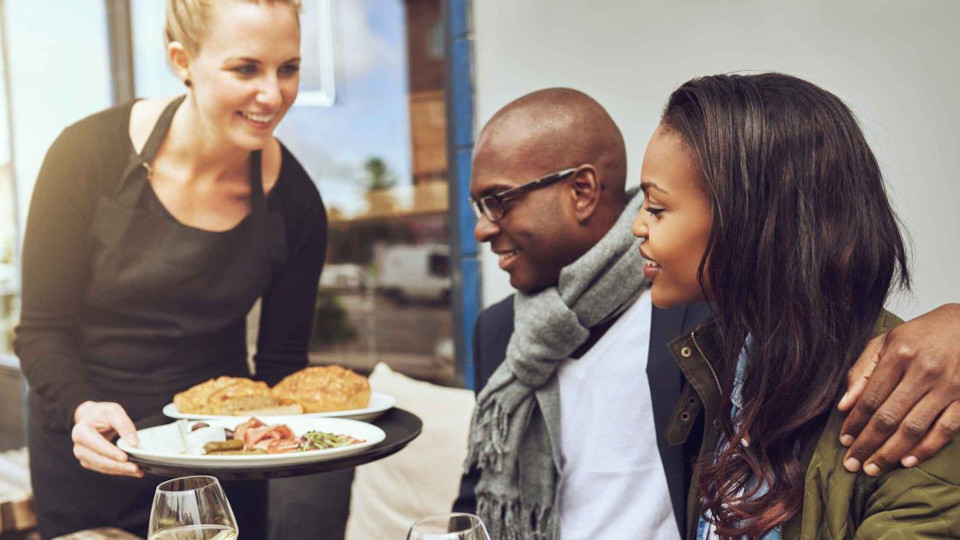 With gas prices and other everyday expenses on the rise, eating out is becoming more of a luxury than ever before. Sadly, it’s a luxury that’s increasingly being sullied by the insipid banter diners are subjected to courtesy of their — usually white and male — server. This isn’t restricted to corporate restaurants either, where the waitstaff is seemingly required to be as ridiculous as possible. No, not even 5-star establishments and independently owned joints offer immunity from the standard service industry dreck anymore.

Here’s a list of the dialog that should be immediately eliminated from eateries everywhere, before hungry customers toss their collective cookies (or just don’t tip).

It’s fine if a doctor, nurse or masseuse at an Asian spa greets you with this nicety, because you can be pretty sure those people are prepared to deliver on that promise. But a waiter in a restaurant? If anything, the butter-filled, sodium-laden stuff they’ll be serving you will hasten your demise, so unless they’ll be “taking care of” your funeral arrangements, bringing you your food is all they’ll be doing.

When people ask for a Kleenex, they don’t really give a fuck if you give them a Puffs. They’re asking for a facial tissue, and Kleenex has become the generic term for it. Same with diners who ask for a Coke. What they want is a cola, and 99.9% of them couldn’t care less if they get a Coke, Pepsi, RC or Faygo.

One thing’s for sure: 100% of them aren’t interested in which beverage company has secured the soft drink contract at the restaurant where they’re eating, so yes, a fucking Pepsi is okay. Please stop asking.

“Can I get you started with an appetizer?”

The question itself isn’t so bad, but what usually follows certainly is: the entire list of appetizers on the menu rattled off by a server instructed to do so by some number cruncher from the corporate office or a desperate owner who’s trying to boost sales to make up for the fact that he’s drinking his profits away after hours.

Another question that wouldn’t be so annoying if it wasn’t invariably asked within seconds after you’ve inserted a forkful of food into your mouth. Can you not see that I’m chewing and would prefer not to speak at the moment?

And you can assume everything tastes fine, otherwise I’d be making funny faces, spitting what I just ate into the nearest napkin and generally causing a scene like this jackass:

“Are you still working on that?”

Am I still eating this, you mean? Cars and conquering their anger issues are just two examples of things people work on. Food (the consumption of it, at least) is not on that list.

May you take my plate away? Now that’s something I’ll consider. Gordon Ramsay would never stand for such an irritating statement, that’s for sure:

“Did you save room for dessert?”

Hold on, let me get out one of those exploratory cameras surgeons use to detect heart blockages and run it down my esophagus to see if there’s any available space in my stomach for a slice of key lime pie. Would I care for some? Sure. But only if there’s room.

What are you gonna do if I decide to go rogue and take the top copy of the credit card slip and leave you with the bottom copy instead? Chase me down and tackle me in the street? Have me arrested?

If I want to be bossed around by someone who’s insufferably possessive and territorial, I’ll eat at home, thank you very much. And it won’t cost as much, either. Most waiters, like this woman, have bigger fish to fry:

25 thoughts on “<span class="entry-title-primary">Seven annoying statements you hear from every white waiter</span> <span class="entry-subtitle">Eating out is a luxury sullied by the insipid banter diners are subjected to by their servers—and it needs to S.T.O.P.</span>”